So what exactly did I do to gain control of Quimero’s feet in 2008 in only a rope halter and a training stick that led to a lighter piaffe and an overall softer and more trainable horse? It all began with teaching him how to yield to pressure in front of him with groundwork. The pressure I used was a waving of a 14-foot lead rope and the occasional assistance of a training stick. A training stick is a natural horsemanship tool. It’s heavier and thicker than a lunge whip, about four feet in length and is used more as a visual cue to the horse and extension of a handler’s arm.

The exercises explained in this blog entry are done from the ground, not under saddle. This blog entry and videos provided are not intended for instructional purposes, but mere examples of training sessions I’ve found successful with my horses. The reader may use the educational material presented here at their own risk. Anyone who would like to try some of the described lessons should first complete at least one weekend clinic (at a minimum) with a professional trainer who specializes in colt-starting such as Clinton Anderson, Pat Parelli, Buck Branamann, Dan Keen or Dennis Reis. I suggest a horse trainer with horse-breaking as their main focus because these are the trainers who are proven proficient at staying safe amidst very dangerous work with horses, and the worked described below can likely trigger unwanted and dangerous behavior in your horse.

This waving pressure I mentioned above is a side to side wave of the handler’s arm that creates loops in the lead rope that travel all the way up to the snap under the horse’s chin. There is no one-wave-fits-all way to apply these actions. Anything that moves or makes a noise is considered “pressure” to a horse and swinging a rope around is one way of applying it. In all circumstances when training or interacting with horses it’s important to remember that we start with the smallest amount of pressure first and increase it until we get a clear response and only then retreat. Remember my blog post on Dan Keen’s “ATM” phrase: Ask, then Tell, then Make.

What I will be describing is all part of a process. One must have a good stop on any horse but to get there, ironically enough, it is helpful to have a good BACKING UP first. To stay safe I orchestrate as much from afar as possible (about ten feet in front of my horse), working out in an open area so there is a lot of room for them to make mistakes without invading my personal space. The steps taken backwards by the horse must be straight, with a clear regular tempo of strides and the horse needs to show that they are responding in relaxation (not reacting out of fear or resistance with an open mouth or neck and nose held straight up in the air) to their handler by performing these strides with a soft relaxed jaw and neck. Another reason I teach backing before stopping is because there is no speed involved in backing and anytime speed is involved or added to a training concept, the degree of difficulty rises. I like to begin each new concept with a horse with lessons that have ample opportunities, like this one, to rest, relax and reward—in this case the concept is yielding to pressure in front of him. That is exactly where I started with Quimero, standing about ten feet in front of him at a halt I waved the rope gently and he didn’t feel it, so I made bigger waves in the rope and all he did was raise his head and neck, so I had to increase the pressure until the snap knocked him under his chin a few times and he decided to move a front foot backwards away from the moving rope and biting bull-snap. And I immediately ceased all movement on my part. He then found relief from the moving rope. From then on I started each time first by a gentle wave of the wrist and increased pressure if I needed to. Horses don’t learn from pressure itself, but when the pressure is released—when the rope quits moving—they are then rewarded and learn from this.

After conditioning him to back up from a halt consistently with light pressure, I then tested how well he understood how to yield to pressure in front of him in a lungeing type scenario, going from walk to stop, then from trot to stop, then from canter to stop. Each time I didn’t quit the motion of the heavy rope until he’d rock his chest back after each stop to make sure he was correlating the respectful action of backing up with each stop. Anytime I noticed him rushing through his work, I’d see that as an opportunity for a pop quiz as well. I even set up a few of these surprise tests on purpose. I’d trailer him to unfamiliar places or turn other frisky horses out into the field by the arena to test our focus. I had to test him aggressively like this because we had a habit, an ingrained way-of-going that had been practiced for 12 years. Historically, every step he’d take when being led around in a halter was more correctly described as saying he led me around by pulling me around with his halter, and it was reflected in our riding as well. It used to be that in each corner we took in a dressage test I felt like a stunt devil driving a tilting motorcycle around a sharp corner with the throttle wide open. His habit of leading me, and our dirt bike action experienced at each dressage show merely conditioned his flight response further with my unwitting help. So in 2008, the groundwork training I did wasn’t just training, it was also un-training. It always takes much more time and more pressure to go back and undo old habits than it does to instill good habits initially.

After the lunge work described above was established I then started working him in between myself and the rail. It is important to note that working a horse between the yourself and a rail will bring out the claustrophobic nature of a horse. They may react by trying to escape. A prey animal feeling trapped will revert to flight instinct behavior which typically means to run forward or away from more solid structure of the fence and possibly over the top of the softer-than-the-fence human. For this reason it’s imperative before working horse between yourself and the wall to master backing up out in an open space first. Sometimes I’d even get him to back up, then walk forward by yielding to pressure from behind him (waving the training stick towards his haunches), then rein-back again by waving the rope, then forward again. Back and forth. Once this exercise was established I could then ask him to slow down his front legs, and speed up his hind legs. His hind feet began creeping up to his forefeet, giving him the appearance of being shaped like a triangle—as if standing on a pedestal.

The pressure used to get my point across to Quimero back in 2008 was large compared to what I now do with my foals and all of my horses. I’ve learned all too well by my years spent with my great teacher Quimero, what can happen If a horse is sensitized to forward-driving aids without being balanced to the equal and opposite conditioning of stopping and backing. Now it is my common practice to begin cultivating both forward and backward responses equally. By starting my foals and all of the horses I work with to have this mentality in incremental segments I have a lot less work to do in the long run. I begin in the halter breaking process, spending only minutes per day with each foal with certain goals in mind. With each goal the horse accomplishes, the structure then evolves into a more sophisticated training exercise. By the time I get to riding maneuvers like lateral work (side-passing) and Piaffe I can rely on working with a horse that has a healthy acceptance of boundaries. In dressage we call this being “on the aids.” In western riding circles they refer to this soft feeling as being broke, with “broke” being more of a continuum. A horse may be  halter-broke, broke to saddle, broke to ride, or so extremely broke that you can ride them bareback and bridle-less.

See the quick video clips above and below for examples of two horses learning and practicing yielding to forward driving pressure and yielding to pressure in front of them. One is a four-year-old Lusitano mare being conditioned to working between a ground person and a fence. This is her fourth session. She is starting to understand that sometimes a handler may ask her to move her feet but not by going freely forward. I reward her try of making short active strides each time by retreating pressure and rubbing her across her topline with the training stick. After another week of repeat sessions such as this one, when I know she is truly consistent in her understanding these demands—I will then begin asking her to creep forward a little bit more with slightly larger strides from behind. She may then offer distinct lifting of diagonal pairs of legs. This move is displayed in the following video by my long time companion and 2012 United States Dressage Federation Andalusian Grand Prix Horse of the Year, Quimero. 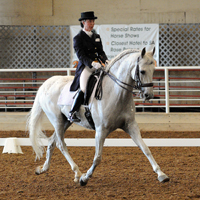 Piaffe II Step by Step How To Start Your Horse