IPPY 2012 Outstanding Books of the Year, “Most Likely to Save the Planet” Award

A vivid, sweeping, passionate story about a modern-day adventure, this is a beautiful chronology of Lucian Spataro and his team’s record-setting Arabian horse ride across the United States to draw attention to the destruction of the world’s rainforests. Told with wit and eloquence, the story moves from the beaches and crowded streets of Los Angeles, across Death Valley and the Painted Desert, through hundreds of towns and cities in the Midwest, before ending on the East Coast in an effort to bring an eye to environmental issues that in 1989 had no visibility or advocate in the United States. The urgency and importance of Spataro’s mission remains today as 20 years later the situation has not improved. Like the original ride itself, this book serves as both a report from the environmental frontline and a fresh call to action.

The Inspiration Behind The Long Ride in 2012

You don’t often get a chance in life to “do good” by doing what you love. But in 1989, I did get that chance as I had the opportunity to combine my passion for horses and the environment in the “Ride Across America.” Now 20 plus years later, we have arrived at a very important juncture as our human population continues past seven billion people our footprint is growing larger every day and if we continue to move forward as we are now, we will most certainly find ourselves at an environmental precipice.

As we look over the edge, we can see very clearly the impact and we can no longer ignore the fact that our actions are fundamentally altering the planet and those natural systems that support life, as we know it. It is a scary realization but one that represents at the same time a unique and unparalleled opportunity to “right the wrongs” and rally the global community around a common cause that is inherently more important that anything we will ever do as humans past, present, or future. Our future and that of generations to come are shaped today by our actions and it seems crazy to imagine that as intelligent as we are that we are incapable of making a conscious decision to act in consensus and change our behavior and rise to this challenge.

It is as clear today as it was 20 years ago why we did the ride and why I wrote The Long Ride. Each of us has a part to play and I am playing my part.  I met many people along the way who, like me, are trying to effect a positive change in their own way and at their own pace. I have found that everyone really can and does make a difference.  I am hoping that these words and this book will motivate others to make a similar choice and we can share this moment and ride this road together.

Share your stories with Lucian on his FaceBook page, purchase and/or enjoy his book. Proceeds help fund environmental projects.

More importantly, keep riding and keep caring about your community.

Here you will find details about drop rigging, why both western and endurance riders choose it, and how to make your horse the most comfortable with this balanced rigging system.

Western and some endurance saddles have a back cinch.  It is designed to keep the cantle from lifting up while working cattle, moving down hills and generally having a sporting time with your horse.

Single rigging does not involve the use of a flank strap. Instead, the rigging hugs the saddle toward a center point. It has become extremely popular as it balances the saddle and eliminates the need for secondary straps an

Drop Rigging has become so popular with riders converters are now available to modify any western saddle.

Riders are so happy with the new rigging system we could only find a single complaint, how to find the perfect saddle pad to protect over the rigging for those long rides and substantial working horse events such as calf roping and cutting.  Riders love the amazing protection ThinLine provides the horses back. So we designed a new pad to protect over the drop rigging buckle. 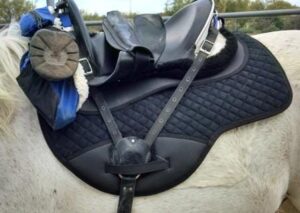 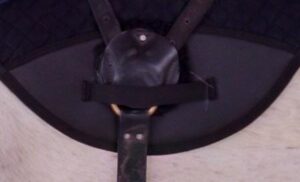 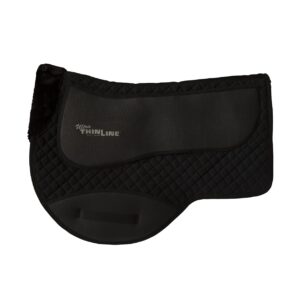 Positioning of the “D’s”

There are four different placements for the hardware.

Full places the saddle over the horse’s center of gravity. It is mostly used with a back cinch for double rigging as in this position any pressure on the horn could pull the saddle’s cantle up. As well as when riding in any steep terrain.

7/8 position is approximately 1 inch back from full and allows for more room for the horse’s shoulder and elbow to move. This position is used for trail riding, barrel racing and reining.

3/4 position is approximately 1 ½ inches back from full. This allows for better distribution of the rider’s weight when in the saddle. This is used for high action turns, fast stops and quick movements when working livestock as well as for extreme terrain.

Center Fire; places the cinch in the middle of the saddle and the horse’s body. A wider cinch is required to prevent saddle slippage. This is mainly used in endurance saddles. Military McClellan saddle and pony express riders used this style rigging. 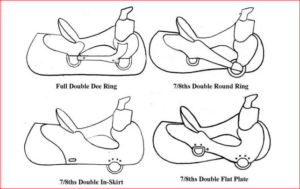 Single Rigged: This means there is a front cinch, but not a back cinch (sometimes called a “flank cinch”). The term “single rigged,” by itself, does not let you know the position of the front cinch (full, 7/8, etc.).

Double Rigged: This means there is a front cinch and a back cinch. The term “double rigged,” by itself, does not let you know the position of the front cinch (full, 7/8, etc.).

Full Double Rigged: This means there is a front cinch and a back cinch, and that the front cinch is in the “full” rigged position (the full distance from the cantle to the pommel).

Type: Rigging can be grouped into two types: conventional on-tree rigging and in skirt rigging. Conventional rigging places the bulk of the cinch strap under the rider’s leg. Inskirt rigging has proven itself to be just as secure as conventional rigging. In this style, the rigging hardware is built directly onto the saddle skirt, either built directly on the skirt or for extra security, built “in” the skirt, where the rigging is attached to an extra metal plate between two layers of leather on the skirt.

Position: The position of the rigging largely depends upon the purpose of the saddle. 3-way rigging allows you the option of choosing a full double rig, 7/8 double rig, or 3/4 double rig. Rigging that sits directly under the midpoint of the saddle is termed “centerfire” rigging, and each position toward the horn is given a different fraction: 5/8, 3/4, or 7/8. Note that Full and often 7/8 rigging requires a back cinch to keep the saddle from tipping forward in certain riding environments. 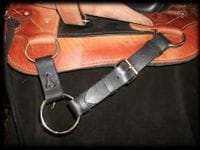 One of the most controversial topics in saddle making today is whether in-skirt rigging is as strong as conventional on-the-tree rigging. Saddle makers go back and forth on this topic. You will rarely find a roping or cutting saddle with in-skirt rigging. However, in-skirt rigging has great benefits for other disciplines if it is built well. It eliminates the bulk of the rigging from under the rider’s leg, giving closer contact.

According to Reinsman, in-skirt rigging can be as strong as a D rig, and also gives you more surface area to grip the horse’s back. Inskirt rigging does not require the cinch to be as tight as a conventional rig. Dale Martin recommends in-skirt rigging especially for barrel, reiner, show, and pleasure saddles because of this.

Flat plate rigging is a compromise between the two of these. Layers of leather are wrapped around a flat plate and riveted to the skirt. An advantage of the flat plate style is that it creates less bulk and does to interfere with the swing of the stirrups.

Another advantage of conventional rigging is that it can be easily replaced and repaired as the saddle wears out. In-skirt rigging, however, requires the entire skirt of the saddle to be repaired and possibly replaced.

The type of rigging a saddle has is related to the purpose of the saddle depending upon the amount of stability the activity requires.

A few ThinLine customers provided us with some of their thoughts on why they moved to drop rigging or why they do not use the flank cinch.
-I don’t use a back cinch about 99% of the time, but I am not roping or pulling loads with the saddle.

-As a rider, the back cinch is ALWAYS in my way for leg, heel or spur signals. I can kick that cinch all I want, the horse doesn’t feel or respond well thru that thick layer of leather. I HAVE spurred the back cinch to no effect, the horse never felt spur either. So my saddle has the back cinch removed. I tend to want a VERY responsive-to-my-leg horse, so the back cinch has to come off my saddle to open that area of horse barrel, for him to feel my signals.

-The back cinch was part of the working saddles – back when the rider (and horse) were “doin’ what comes naturally” on a ranch. When a 200 – 1000# cow hits the end of a rope that’s attached to the horn of your saddle, the cantle is likely to raise up a bit. (that’s an understatement) So to keep you from meeting said cow up close & personal, the back cinch helps keep the seat of the saddle down where you can sit on it.

-Many reining horses are trained and shown without a flank cinch because they really get down and curling under themselves in their slides to a stop and some like for them to be completely free to do so, no flank cinch tight there.

Here are a few reviews from happy customers: